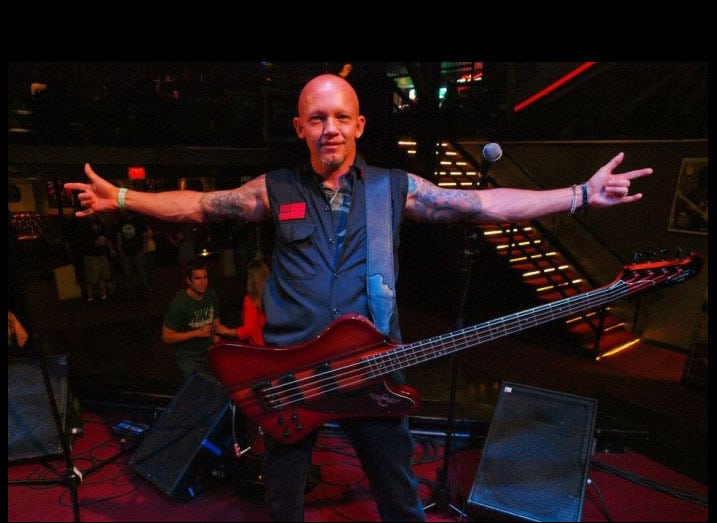 Born in Lampasas Texas but grew up in SoCal Jeff’s early years were spent in Norwalk Ca. where he got his first inspiration in music when attending early shows of KISS, Ted Nugent and Aerosmith in the 70’s. The passion for music started early while listening to everything from The Beatles, Rolling Stones, Jimi Hendrix, Led Zeppelin, Queen, Aerosmith to CCR and anything blues. After going to see a few local bands, Mammoth before they were called Van Halen, Quiet Riot with Randy Rhodes and A La Carte in the late 70’s. It was that inspiration that music had on Jeff and he knew bass was what he was attracted to. Influences are Paul McCartney, John Paul Jones (Led Zeppelin), John Entwistle (The Who), Fran Sheehan (Boston), Leon Wilkeson (Lynyrd Skynyrd), Pete Way (UFO) and Geezer Butler (Black Sabbath).

After moving to Orange County Ca. in 1978, Jeff studied bass under Al Manfredi of Manfredi Music Masters who played for a while with Rod Stewart. This is where he became a student of clasical, improvisational and deep blues influenced bass styles. Hard Rock was king and adding an influence of melody and soul was his staple along with connecting in the pocket with drummers that have a groove. There were several bands Jeff played in during the late 70’s and early 80’s: Extra Dots, Daimond Dust, Triix, Wild Rose, Racer, White Lie and Straight Shooter. Playing the LA/Hollywood and OC clubs during the rise of the LA metal scene was a blast during that time watching several of his friends get signed and make it big was an amazing time. Early on Jeff played with the likes of Ratt, Motley Crue, Poison, Metallica, Great White and the list goes on all before they were known around the world.

After years of playing Jeff left the music scene of LA/OC and moved to Murrieta Ca. to raise a family where he still lives today and enjoys his life with family and friends. By the virtue of social media in 2009 he was contacted by a long time drummer friend Brent Walsh (RIP) to come play at a jam event. He had not played for many years and at that event Jeff connected with his former band WHITE LIE. Rumors and plans about a reunion were out and WHITE LIE was asked to support the legendary hard rock band Y&T on their SoCal stop of their world tour. Shortly after he was asked to support and share the stage with Quiet Riot, Dokken, Alcatraz (with Graham Bonnet of Rainbow), UFO, Michael Schenker, Great White, Warrant and Frank Hannon of Tesla.

After an exhausting schedule with WHITE LIE Jeff decided to step away from that level of playing focus his attention to the local Temecula/Murrieta area and simply have fun and be close to home. Jeff attended many open mic events and jams before connecting up with Tim Santo and Chad LaShelle in Damn Dirty Apes which is a highly sought after power trio playing rock covers from the 60’s to current and crossing many styles of Rock and Roll. Truly a must see band that delivers on all levels and always a great time. Additionally Jeff continues to play, write and record original music with Fermented Youth based in Orange County and can be found weekly at his studio in Huntington Beach.

Quote: Music has been the vehicle to meet many amazing people in my life that include many of my music idols. It’s the true friendships that matter most to me with many spanning over 37 years that keep me going and the best is yet to come. “Long Live Rock and Roll”