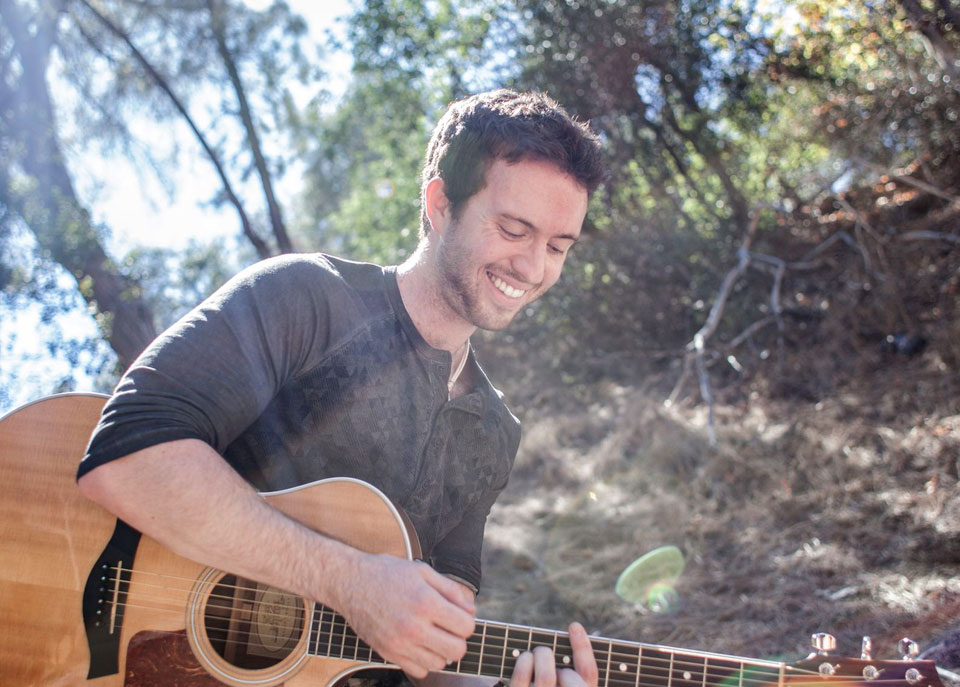 “You have to see him live in order to fully ‘get it’. He’s just that good.”
In a musical age where the beats are getting heavier, the production thicker, and the live performances more theatrical, Dustin Jake likes to keep things simple: Just him, an acoustic guitar, and a great song.

Based out of Temecula, CA, the singer-songwriter has been taking Southern California wine country by storm with his unique blend of acoustic soul, pop, jazz, and even a touch of hip-hop. With his knack for clever lyrics, groovy melodies, and “butter-smooth” vocals, Dustin is the epitome of effortlessness. A true acoustic artist. Ironically, though, it’s been his penchant for simplicity that has brought so much depth to his songwriting.

“I don’t play with a band, so I can’t add layers of guitar solos or five part harmonies.” Says the t-shirt and jeans-wearing singer/songwriter. “My layers have to be more subtle. Stories and emotions. Words and melodies. I’m obsessed with fitting it all together just right.”

Words and melodies aren’t the only things fitting together for Dustin these days. Over the last year he has built a strong following as a regular performer at esteemed Temecula Wineries such as Leoness Cellars, Monte De Oro Winery, Keyways Vineyard and Winery, Europa Village, and many more. Also on several occasions, in both Temecula and the historic downtown Las Vegas district, he even had the opportunity to open for the band “Elvis Monroe”, which features Ben Carey, the lead guitarist for “Lifehouse”, Bryan Hopkins of “Paperback Hero”, and Ryan MacMillan of “Matchbox 20”.

If there’s one common theme among Dustin’s growing fan base, it’s this: You have to see him live in order to fully “get it”. He’s just that good. Bantering with audience members, telling stories, and just plain having fun, Dustin puts on a show like a seasoned veteran, yet he’s only been at it for a few years.

Despite all of the success, Dustin’s main satisfaction still comes from his ability to put a story onto a set of chords. He’s spent countless days and many late nights pouring over the subtleties of his ever-expanding song collection. Now, with a slew of new grooves – such as fan-favorites “Red Lights”, the snarkily titled “I’m Just Not Into You”, and beach-side jam “Manhattan Beach Boulevard” – itching to break out of the songbooks, he’s ready to shed some new layers and tell some new tales.

And he only needs a guitar to do it. It’s really that simple